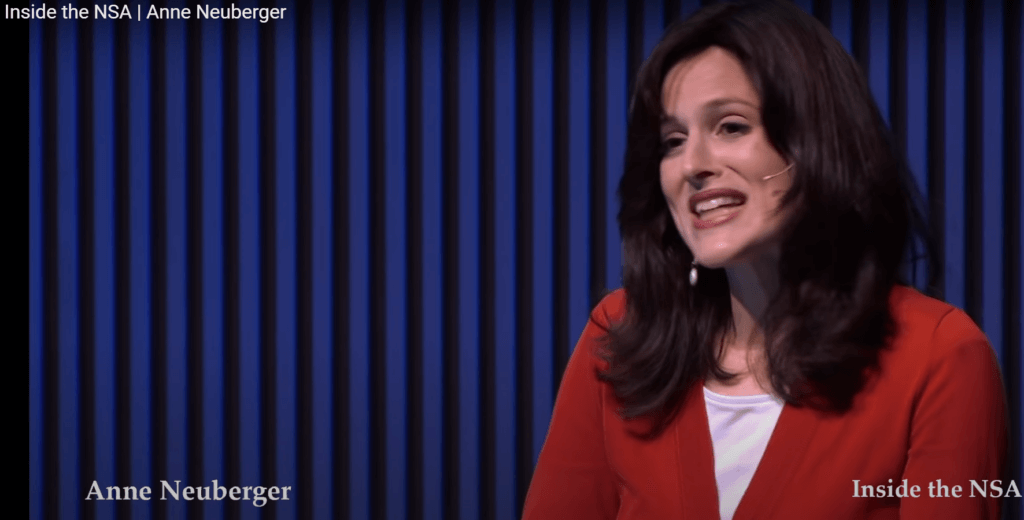 “On Wednesday, Mother Jones and NBC News reported that a top Biden national security aide who is an expert on Russian cyber had given over half a million dollars to AIPAC in recent years through a family foundation. And the aide’s husband is on the AIPAC executive council in Baltimore.

AIPAC is of course the leading Israel lobby group, which supports everything the rightwing Israeli government does, from persecuting Palestinians to threatening Iran.

Well in no time, NBC (and its very professional reporter, Ken Dilanian) came under a hail of criticism including among others AIPAC, other Jewish groups, and a senior member of the House Foreign Affairs Committee.

.@NBCNews must retract this offensive story. Charges of dual loyalty are anti-Semitic and insult millions of Americans—Jewish & non-Jewish—who stand by our ally Israel. We will not be deterred from exercising our rights as citizens to advocate for a strong US-Israel relationship.

Then Biden’s NSC spokesperson Emily Horne jumped in to say the story was an antisemitic, spurious ad hominem attack, and a smear campaign.

We are appalled by recent spurious accusations against our staff. We welcome oversight and scrutiny, but there is no justification for false and ad hominem attacks based on ethnic, racial, or religious identity. The women and men of the NSC are patriotic, dedicated, and serve their country with distinction. Being forced to endure public smear campaigns should not be part of working on behalf of the American people.

NBC folded. It retracted the story, updating its report with an editor’s preface stating that the article should not have been published because its reliance on anonymous sources does not meet NBC standards and because Neuberger was not given “adequate time to respond to our reporting.” NBC is keeping the story on its website as a matter of record.

Mother Jones is sticking with its story, but David Corn reports that Biden’s NSC wants Mother Jones to take the story down.

Emily Horne, an NSC spokesperson, sent Mother Jones the following statement: “We note that NBC has pulled down their own version of this story, saying it fell short of their reporting standards, and look forward to Mother Jones doing the same.

NBC’s crime was this paragraph questioning Neuberger’s fitness because of her support for the Israel lobby.

A cross section of current and former intelligence officials and foreign policy experts — none of whom were willing to be named — said the donations created an appearance problem. They noted that Israel, whose companies build and sell spying gear to regimes abroad and whose intelligence agencies hack foreign governments around the world, has a big stake in American cyber policy.

A perfectly legitimate question. AIPAC is devoted to Israel. But of course all anyone is allowed to care about in Washington is Russian influence (NPR has a breathless report on same today.)

Here are the AIPAC facts as reported by David Corn that are not in dispute. Neuberger’s husband is big in AIPAC and worked against the Iran deal.

Cardin was one of four Democratic senators to vote against Obama’s deal. Note that there have been no negative career consequences for these turncoats. Chuck Schumer is now Majority Leader. And Anne Neuberger gets a top appointment in the NSC.

Twelve years ago, Neuberger and her husband created the Anne and Yehuda Neuberger Foundation to “carry out the charitable and religious purposes of the Associated Jewish Community Federation of Baltimore,” according to its tax records…

From 2012 through 2018—the last year for which tax records for the foundation are available—the Neubergers provided $559,000 to AIPAC.

The foundation also gave money to the think-tank adored by Donald Trump that is bent on war with Iran: $10,500 (in 2013 and 2011) to the Foundation for the Defense of Democracies, “a hawkish, pro-Israel think-tank in Washington.”

Mother Jones makes plain, obvious points: Israel is a cyber “powerhouse”, Israel has spied on the U.S., the two countries’ perceived interests may overlap but aren’t congruent, and Neuberger’s huge donations create an appearance of a conflict. One expert Corn quotes says it’s “unwise” to have Neuberger in the job.

[T]he CIA has considered Israel a top counterintelligence threat. And it is not hard to conceive of cyber-related conflicts that could arise between the two states. So should a Biden administration national security official in charge of US cyber policy be supporting an influence group aligned with the Israeli government? “It’s unwise at best,” says John Sipher, a former CIA official. “In her world, when people think of cyber-threats, Israel is always there, even if it’s an ally. It is surprising that someone in cyber who understands Israeli capabilities would not want to steer clear of these politics.”

P.S. Benjamin Netanyahu lately met convicted American spy Jonathan Pollard at the Israeli airport in the middle of the night after he was allowed by the Justice Department to leave the U.S., and Pollard and his wife kissed the ground, and Netanyahu declared, “You’re home.”

And AIPAC supports everything that Netanyahu does. But to question AIPAC’s influence in Washington–that’s a smear campaign!

There was of course nothing wrong with the questions NBC raised. “Read the original piece. Completely standard, and the people raising the concerns [about Neuberger’s fitness] are ‘a cross section of current and former intelligence officials and foreign policy experts’ who note that Israel ‘has a big stake in American cyber policy,’” writes Branko Marcetic of Jacobin.

NBC’s scrubbing of the story, he adds, is “A perfect combination of establishment media fealty to Israel and this increasingly creepy favouritism for the new administration.”

As for fealty to Israel, former ambassador to Israel Dan Shapiro, who is reported by Tablet to be in line for a Biden appointment, jumped in to trash the story.

I don’t know Anne Neuberger, but the “charge” against her — that she’s not fit for national security work because her family foundation supported political work that is fully protected under the Constitution — is offensive and belied by her stellar career. Glad she is serving.

Dan Shapiro left his posting as ambassador to live in that foreign country — which he told a US Jewish audience is “this miracle, this gift, this jewel” and has worked for a national security thinktank in Israel and represented it in testimony to Congress, service that should have required him to register as a foreign agent. But we are of course never allowed to question the extent of someone’s devotion to a foreign country.

And Rep. Gregory Meeks of Foreign Affairs signs off on Shapiro’s comment:

Agreed. The offensive dual loyalty trope insinuated by the article is unacceptable, and NBC is correct to acknowledge it was wrong to have posted it. Anne Neuberger is a professional and this administration will benefit from her expertise.

By the way, Congresspeople get a lot of money from AIPAC supporters.

This whole story is a farce because you can only imagine what would have happened if someone who’d given half a million dollars to a Russia advocacy group had gotten a job in the Trump security team. But you can’t even raise the issue here. I like the comment by “Follow-upper” on twitter:

The person who wants to head up US cybersecurity was donating hundreds of thousands to the lobbying arm of a foreign government that recently welcomed a citizen of theirs who spied on the US as a hero to great fanfare. This is not even allowed to be brought up or questioned?

Update: Look at how big Jewish Israel lobby groups came down on the publications. American Jewish Committee: “@NBCNews has now taken down this repugnant smear piece and acknowledged that it failed to meet its journalistic standards. Your move, @DavidCornDC.”

The Conference of Presidents of Major American Jewish Organizations also ratcheted up the rhetoric:

We call on @MotherJones to withdraw its attack on Deputy National Security Adviser Anne Neuberger for her family’s support for @AIPAC. She has served the American people with distinction. This attack on her character smacks of age-old antisemitic canards.

Corn stands strong: “Neither my story nor the NBC News story on the same subject raised any question of loyalty. These pieces reported that national security and government ethics experts consider these donations problematic.”