Hong Kong’s Civil Human Rights Front (CHRF), the biggest opposition alliance in the city, announced in a statement that it will disband following a unanimous resolution, starting Sunday.

The dissolution, however, will not help them escape from their legal responsibility as the Hong Kong police would continue their probe of this anti-China group that has been provoking chaos and instigating anti-China sentiment for many years.

While the central authorities – the State Council’s Hong Kong and Macao Affairs Office and the central government’s liaison office in Hong Kong – hailed the result as highly expected, claiming that under the national security law for Hong Kong, any individual or organization that insists on an anti-China stance of provoking riots will have “no way to go,” experts in both Hong Kong and the Chinese mainland forecast that more radical opposition groups including the Hong Kong Alliance in Support of Patriotic Democratic Movements of China (known as Hong Kong Alliance), a journalist association and the Hong Kong Association of Falun Gong cult are likely to follow suit.

Meanwhile, the Hong Kong Police Force (HKPF) said in a public statement on Sunday that police are actively taking follow-up action on the CHRF’s violation of the Societies Ordinance, under which any unlawful society may face an imprisonment for three years, according to the local law in Hong Kong.

With palpable positive changes in the city’s political life under the national security law for Hong Kong over the past year, which effectively plugged the legal loopholes, it is time for the rest of the radical groups to reconsider their purposes and operations, as those acts challenging both the legal and political bottom lines will not be accepted and will always be held to account, experts and official warned.

The CHRF said in a statement published on Sunday noon that representatives of a handful of its member groups attended a meeting on Friday and had unanimously decided to dissolve with immediately effect.

The CHRF said that its secretariat can no longer operate because its convener Figo Chan Ho-wun is incarcerated over numerous cases. Since no one has indicated they will take over, the CHRF has no choice but to disband, according to the CHRF statement.

Chan is currently serving an 18-month jail term for organizing an unauthorized assembly on October 1, 2019 and is facing multiple charges.

Established in 2002 and as one of the key opposition groups in Hong Kong, the CHRF has been involved in many major anti-government events over the past few years such as the illegal “Occupy Central” in 2014 and the radical anti-extradition bill protests that turned into a months-long social turmoil, both of which were considered by experts as well-plotted attempts of “color revolution.”

In March, when reports said the CHRF was investigated by police for allegedly violating the law, many core member groups, including the Democratic Party and the Hong Kong Professional Teachers’ Union (PTU), scrambled to withdraw from the CHRF and clear their boundaries. Some of the key figures of the CHRF were also arrested for allegedly violating the national security law for Hong Kong.

The CHRF’s disbandment was inevitable, as it had a flawed registration, is suspected of being involved in money laundering, and has long been involved in radical activities that constantly damaged social stability and national sovereignty in Hong Kong, according to experts.

The CHRF has always been an illegal organization without even registering locally, and by using the excuse of “peaceful, rational and non-violent” protests, it has been colluding with various anti-China rioters in order to confront the central government and make troubles in Hong Kong, the spokesperson of the State Council’s Hong Kong and Macao Affairs Office said on Sunday.

At the moment of dissolution, the group has not yet shown any regret, continuing with the disguise of the so-called human rights, democracy and freedom in attempt to gain public sympathy and instigate public opinion. “Such a deathbed struggle is hateful, contemptible and ridiculous,” the spokesperson noted.

The liaison office of the central government in Hong Kong also listed a number of misdeeds of the CHRF over the past 19 years such as its opposition to Article 23 and to the high-speed railway, its plot of “Occupy Central” in 2014 and anti-extradition actions, turning protests into violence against the police, and attacks against passersby, storming the Legislative Council and advocating for “Hong Kong independence” by asking for the help of foreign consulates in Hong Kong.

“Despite claiming they are legal, peaceful and rational, they are completely the root of the chaos in Hong Kong,” the liaison office said. 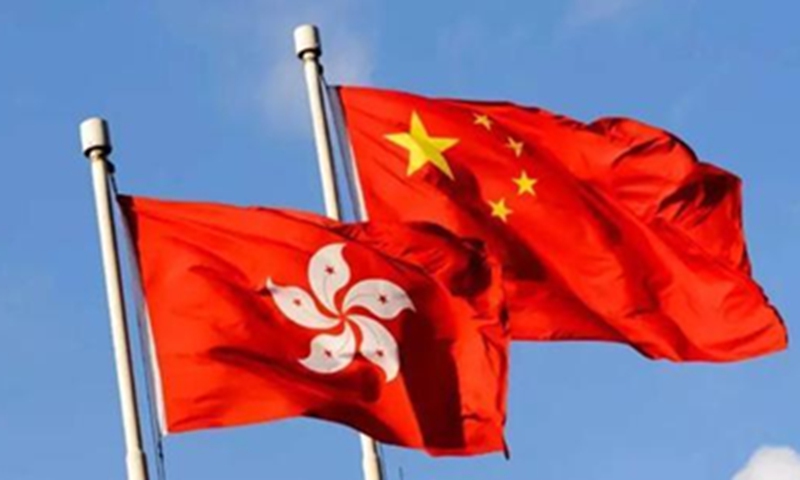 The Return of Hong Kong

To be held accountable

The dissolution does not mean the CHRF will be exempt from criminal responsibility. The group’s principle personnel such as committee chairman, vice chairman, secretary and committee members who have participated in any CHRF decision to coordinate unlawful assembly or unauthorized assembly are personally liable, legal experts said.

In a statement the HKPF released on Sunday, the police reiterated that an organization and its member(s) remain criminally liable for the offence committed, regardless of the disbandment of the organization or the resignation of its member(s).

The HKPF said that the CHRF was an illegally operating organization, as it had never been legally registered since its establishment in 2002. Also, the police requested the CHRF to submit information of its members, activities and funding in accordance with section 15 of the Societies Ordinance in April. Yet the CHRF failed to submit the requested information to the Societies Officer within the designated period of time. The police are now actively taking follow-up action on the CHRF’s violation of the Societies Ordinance.

The HKPF must have collected evidence that the CHRF incited, aided, abetted, counseled or procured unlawful assembly or unauthorized assembly, Lawrence Ma, barrister and chairman of the Hong Kong Legal Exchange Foundation, told the Global Times on Sunday.

“Dissolution does not absolve criminal responsibility as the criminal law affixes liability on individual acts and conduct. The individual defendant cannot use a corporate shield to evade criminal charge,” he said.

According to the penalties on office-bearers of an unlawful society, any person managing or assisting in the management of any unlawful society shall be guilty of an offence and shall be liable on conviction on indictment to a fine at level 6, which equals to HK$100,000 ($12,848) and imprisonment for three years.

The CHRF’s disbandment came shortly after the Hong Kong Professional Teachers’ Union (PTU), city’s biggest teachers’ union which has been recognized as a de facto political body, announced its disbandment on Tuesday. The PTU is considered by some experts to be a major supporter behind the CHRF.

According to media reports, at least 13 organizations announced dissolution and canceled their accounts on social media platforms in late June and early July – around the first anniversary of the implementation of the national security law for Hong Kong.

By disbanding themselves, these groups are attempting to evade prosecution, Fan Peng, a research fellow at the Chinese Academy of Social Sciences’ Institute of Political Sciences, told the Global Times in an earlier interview. “Later, when the authorities monitor these organizations, it may be more difficult to dispose of personnel and assets because they have been disbanded.”

Consecutive announcements of the disbandment of a number of radical oppositions show that the national security law for Hong Kong has effectively plugged the previous legal loopholes in Hong Kong, establishing the bottom line for society, some experts said, noting that it is time for other radical organizations to evaluate their behaviors and the potential danger of those behaviors to society.

“The dissolutions one after the other sound a warning bell to the rest of the radical opposition groups, which have to draw a clear line from their past behaviors as it’s time for them to realize that if their purposes and operations go against national security, they would be definitely punished,” a Beijing-based senior expert specializing in Hong Kong affairs told the Global Times on Sunday on condition of anonymity.

While the national security law for Hong Kong has already ushered the city’s political life into a new era, and anti-China rioting forces no longer exist, local officials pointed out that with all these positive changes, Hong Kong will not be a hotbed for secessionist forces and radical opposition that aims to subvert power.

All organizations that are detrimental to national security and the stability of Hong Kong society should not continue to operate, Tam Yiu-chung, a Hong Kong member of the National People’s Congress Standing Committee, told the Global Times on Sunday.

More radical political groups that have been involved in secessionist activities may announce disbandment in the future given the legal risks they face, some experts forecast.

The Hong Kong Alliance is highly likely to announce disbandment soon, Lau Siu-kai, vice-president of the Chinese Association of Hong Kong and Macao Studies, told the Global Times on Sunday.

The expert explained that these groups may have been in violation of the national security law for Hong Kong and local laws. “They will weigh the risks themselves and choose to disband. They do not want to be banned by the government, because it will be more detrimental to the group itself and its members,” he noted.

In order to ensure their cooperation with the government and maintain licensing as well as supervision, organizations like the Law Society of Hong Kong and Hong Kong Bar Association should stop being entangled in political disputes, Lau said.