“An anti-armor weapon jointly developed by Israel, Singapore and a German company has been seen in operational use by the Neo-Nazi Azov Battalionagainst Russian military forces.

In a video published by the Azov Battalion, a Ukrainian fighter, ostensibly affiliated with the controversial unit, can be seen firing the portable anti-tank weapon at what appears to be a Russian armored personnel carrier (APC).

As Western countries have undertaken massive arms transfers to Ukraine to support it in its war against Russia, critics such as The Intercept’s Sara Sirota have expressed concern that these weapons could end up in the Azov Battalion, which was integrated into Ukraine’s National Force in 2014.

Anti-tank and armor weapons such as the Javelin, NLAW and MATADOR have been a mainstay of arms transfers to Ukraine. In a March 16 briefing, White House Press Secretary Jen Psaki said “anti-armor and air-defense systems, they are effectively defending the country.”

The German Defense Ministry listed 2,650 MATADORs for purchase by Ukraine, Süddeutsche Zeitung reported in March. Euromaidan Press reported that they had been purchased for €25 million, along with another 2,450 that will be produced. 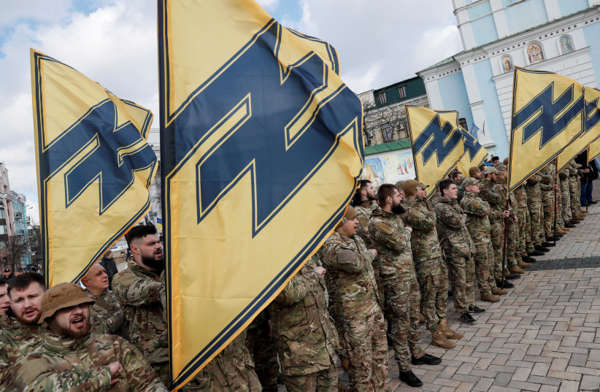 © Provided by The Jerusalem PostMembers of Azov battalion attend a rally on the Volunteer Day honouring fighters, who joined the Ukrainian armed forces during a military conflict in the country’s eastern regions, in central Kiev, Ukraine (credit: GLEB GARANICH/REUTERS)

The recently published video shows that these partly Israeli-developed weapons are now in the hands of the Azov Battalion, which has been widely characterized as a neo-Nazi militia. While CNN and other media analysis has weighed the possibility that Azov has reformed, the group still has prominent neo-Nazis in its ranks and features white supremacist symbols.

The Battalion’s logo still has the Black Sun, a common white supremacist symbol, and the Wolfsangel symbol used by the Nazi SS.

This is not the first time concerns have been raised about Israeli weapons and Ukraine. In February, Interfax Ukraine reported that the Israeli Defense Ministry told Baltic states that it wouldn’t meet requests for third-party transfer of Israeli-made weapons to Ukraine.

In 2018, Haaretz reported that human rights activists filed a petition to the High Court of Justice demanding an end to arms exports to Ukraine over concern they would reach Azov militants. Haaretz published an image showing an Israel Weapons Industry Tavor rifle being held by an Azov Battalion soldier. Tavors have also been seen wielded by Ukrainian fighters in the recent conflict, produced under license by Ukrainian company RPC Fort as the FORT-221, according to The Warzone.

What is the MATADOR?

The MATADOR platform was developed for the confined spaces of urban warfare environments and is capable of penetrating the armor of most APCs and light tanks, according to the Singaporean Defense Ministry.

The weapon has a “dual-capability” warhead beyond normal anti-armor weapons, a delay action mode designed to blow open walls and create an entry into buildings. When fighting in urban environments, the ability to avoid entering though doors and windows can mean avoiding ambush or booby traps.

The weapon is “among the lightest in its class,” according to the Singaporean Defense Ministry, and extremely versatile.

According to Dynamit Nobel Defense, the MATADOR is capable of firing smokescreen and illumination munitions in addition to its anti-armor, vehicle and tank functions.

It has a maximum effective range of 500 meters, according to technical specifications published by the Singaporean Defense Ministry.

The MATADOR is in use by several states, including the Israel Defense Forces, where it has seen effective and active service. Among some IDF soldiers, the weapon is considered too expensive to fire in training. The wall opening function is particularly valued by IDF soldiers, who have used it in heavily built-up environments such as the Gaza Strip.”