“China’s top office on Taiwan affairs announced on Tuesday new punitive measures on diehard “Taiwan independence” separatists including banning them and their family members from entering the Chinese mainland, Hong Kong and Macao SARs, and restricting their affiliated institutions from cooperating with relevant organizations and individuals on the mainland. It also included seven new diehard separatists into the mainland’s list, who will also face punishment for their egregious deeds in advocating the “Taiwan independence.”

Mainland experts called the latest punitive measures a strong deterrent to Taiwan separatists who have become the biggest obstacle for the national reunification, and those sanctions will “make them feel the pain.” Especially, figures including Su Tseng-chang, You Si-kun and Jaushieh Joseph Wu, who had already been on the list of diehard separatists, will be held to lifelong accountability according to law.

Some diehard separatists like Su and You are stubborn and reluctant to admit their mistakes. They may claim that they won’t be afraid of the mainland’s sanctions and those punitive measures won’t have any impact on their career or affiliated businesses. However, they won’t be able to ignore the fact they will suffer long-standing costs that will bring serious and long-term damages to themselves as well as to their family members and related parties, experts said.

The white paper entitled “The Taiwan Question and China’s Reunification in the New Era” released on Wednesday said the DPP authorities have adopted a separatist stance, and colluded with external forces in successive provocative actions designed to divide the country. The paper also said the mainland will leave no room for separatist activities in any form and has already taken lawful action against and to effectively deter separatist forces.

In order to safeguard the peaceful development of the cross-Straits relations and the immediate interests of the people on both sides of the Straits, and resolutely punish “Taiwan independence” diehard elements, the Taiwan Work Office of the Communist Party of China Central Committee included political figures Bi-khim Hsiao, Koo Li-hsiung, Tsai Chi-chang, Ker Chien-ming, Lin Fei-fan, Chen Jiau-hua and Wang Ting-yu on the list of diehard “Taiwan independence” separatists.

Cracking down the separatists in Taiwan is an important part of our work of “fighting against any force that would divide the country, and pool strengths to advance national reunification,” as those figures reject reunification, seek secessionism and collude with external forces to sabotage the sovereignty, national security and our development interests. The separatists are the enemies of the country, Tang Yonghong, deputy director of the Taiwan Research Center at Xiamen University, told the Global Times on Tuesday.

“It has become part of our strategy in handling Taiwan-related affairs. We have released two batches of [Taiwan] political figures on the list, and actually, there are more to come,” Tang said. “If they continue to be arrogant and aggressive, they will see their names on the list one day.”

Su, head of Taiwan’s executive body and a diehard secessionist, along with You and Wu have been put on the sanction list, which was first unveiled in November 2021.

The list of diehard separatists unveiled now is not complete, but it is typical and is right to the point, covering two categories of political figures, Tian Feilong, an associate professor of law at Beihang University, told the Global Times on Tuesday.

Seven political figures put on the list on Tuesday include Bi-khim Hsiao, who spared no effort in promoting the recent visit of US House Speaker Nancy Pelosi to  the Taiwan region, which is a serious provocation that betrays US’ commitment to China on the Taiwan question.

Ma Xiaoguang, spokesperson for the Taiwan Affairs Office of the State Council, said in early August that Hsiao will face the reckoning of history.

In addition to Hsiao, other separatists on the list include Tsai Chi-Chang, “vice president” of Taiwan’s “Legislative Yuan” who reversed the truth by accusing the mainland’s military exercises as the source of tension across the Taiwan Straits.

Some diehard separatists such as Lin Fei-fan, the leader of the anti-service trade agreement movement, Wang Ting-yu, a DPP legislator, and Chen Jiau-hua, the leader of the New Power Party, are also included on the list. Lin not only advocated for the “Taiwan independence” but also publicly supported for secessionists in Hong Kong.

Some experts believe as long as the financial supporters of those diehard separatists on the list have connection with the mainland or have financing channels through Hong Kong and Macao, those connection and channels will be cut off. It’s sending a clear message that if the political figures in Taiwan hope to gain benefits from the cross-Straits relations, they need to consider their words and deeds carefully.

It’s also like the Sword of Damocles hanging over their head, Yan Anlin, deputy director of the Shanghai Institute of International Affairs, told the Global Times on Tuesday.

“Some separatists may feel that they won’t be punished in the short term, but as long as they have been put onto the list, it means they could be punished anytime, anywhere,” Yan said.

Also, every political figure and his or her family has enterprises associated with them, after they have been sanctioned, it means those enterprises can’t do business with the mainland anymore, nor with Hong Kong and Macao, he noted. “If those punitive measures are implemented, those separatists will surely feel the pain.” 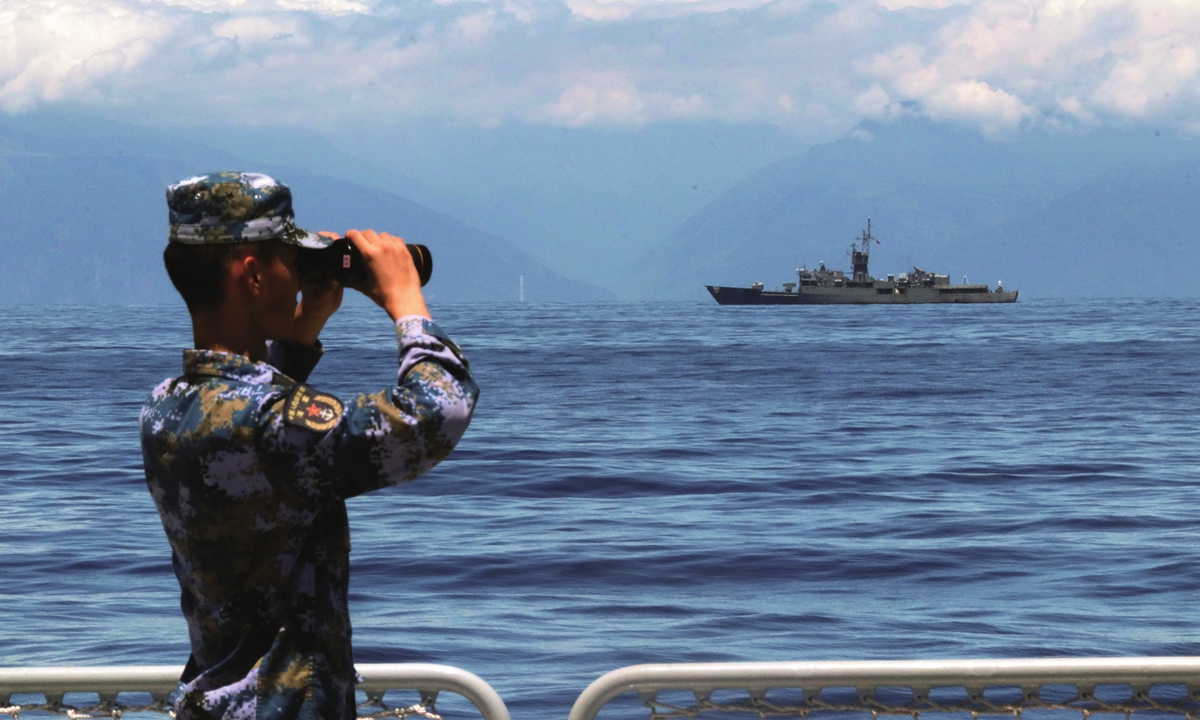 A People’s Liberation Army（PLA） soldier looks around with a telescope on August 5, 2022, as the Navy of the PLA Eastern Theater Command continues drills the waters around the island of Taiwan. Photo: Xinhua

Many enterprises in Taiwan have made donations to both Kuomintang-led blue camp and the DPP-led green camp, and political donation is also widely known, Julian Kuo, who used to serve at “Legislative Yuan,” was quoted as saying in a media report by Hong Kong media HK01.com in November 2021.

Among the top 10 donators to Su Chiao-hui, a DPP “lawmaker” and the daughter of Su Tseng-chang, some have business relations with the mainland, and the sanctions will surely cut off her financial channels.

FEG donated NT$58 million ($2.09 million) to the DPP in the 2020 regional legislative elections, making it the DPP’s biggest donor, according to statistics posted online by the Taiwan authorities. Other DPP donors in 2020 included Highwealth Construction, which donated NT$11.6 million and Hon Hai Technology Group, known as Foxconn, which financed NT$4 million.

The impact of the banning related businesses will be felt immediately. Not only the channels through the mainland, Hong Kong and Macao for these two-faced politicians will be cut off, those related institutions and enterprises will suffer serious losses and will have to take compliance measures to cut off ties with those political figures, Tian noted.

“Some other punitive measures have not been announced yet. Those measures could include investigation, freezing the relevant property, and further criminal punishment,” he said. “They will have to pay much more costs and it’s impossible for them to win this game.””