“Amid escalating pressure from the US and the West, Russian President Vladimir Putin announced on Wednesday a partial mobilization of the nation’s military reserves, and pointed out that the West poses threats to Russia’s existence, pledging to use all the instruments at its disposal to counter a threat against its territorial integrity as four regions in eastern Ukraine plan to hold referendums in coming days.

Chinese experts said it is a clear sign of the Ukraine crisis escalation, particularly when the Western bloc has kidnapped the ongoing UN General Assembly (UNGA) and turned it into an anti-Russia stage, continuing to fan flames and further dim the chance for peace negotiations.

Putin said in a national televised address on Wednesday that the Russian Defense Ministry had recommended drawing military reservists into active service, and the measure is sensible and necessary under the circumstances, RT reported, “The country is fighting the entire Western military machine in Ukraine,” and Putin accused Kiev of backing away from peace talks with Moscow.

The mobilization decree will see 300,000 additional personnel called to serve in Ukraine, according to media reports.

Reuters said it is the country’s first ordered mobilization since World War II and The New York Times described it as a rare address to the nation as “Russia suffers steep losses.”

The address was made after four regions in Ukraine – Donetsk, Lugansk, Zaporizhzhia and Kherson – decided on Tuesday to hold referendums from September 23 to 27. Putin also said on Wednesday that Russia will “do its utmost for the safety of referendums in these regions,” TASS said.

It could also mean the loss of opportunities for peace negotiations, as there could be a permanent rift between Russia and Ukraine. Such a regrettable situation deserves a deep reflection on who led to such an unprecedented crisis and how, they noted.

Part of the mobilization order shows that Russia has made tactical adjustments to the current operations and toward the Ukrainian counteroffensive, marking that the conflict has entered a new stage, Zhao Huirong, an Eastern European studies expert from the Chinese Academy of Social Sciences, told the Global Times on Wednesday.

“It’s inevitable that the confrontation will expand and be prolonged, and as both sides are eager to achieve an absolute advantage and even a final victory on the battlefield, the possibility of negotiations becomes less likely,” Zhao said.

While Putin warned the West that he was not “bluffing” over using nuclear weapons, some Chinese experts believe it is a tactic to warn the West against providing more weapons to Ukraine. “But as the conflict escalates, the risk of using larger lethal weapons and even nuclear weapons on the battlefield is rising, and reducing the risk requires dialogue between the two sides, especially between Russia and the West,” she said. 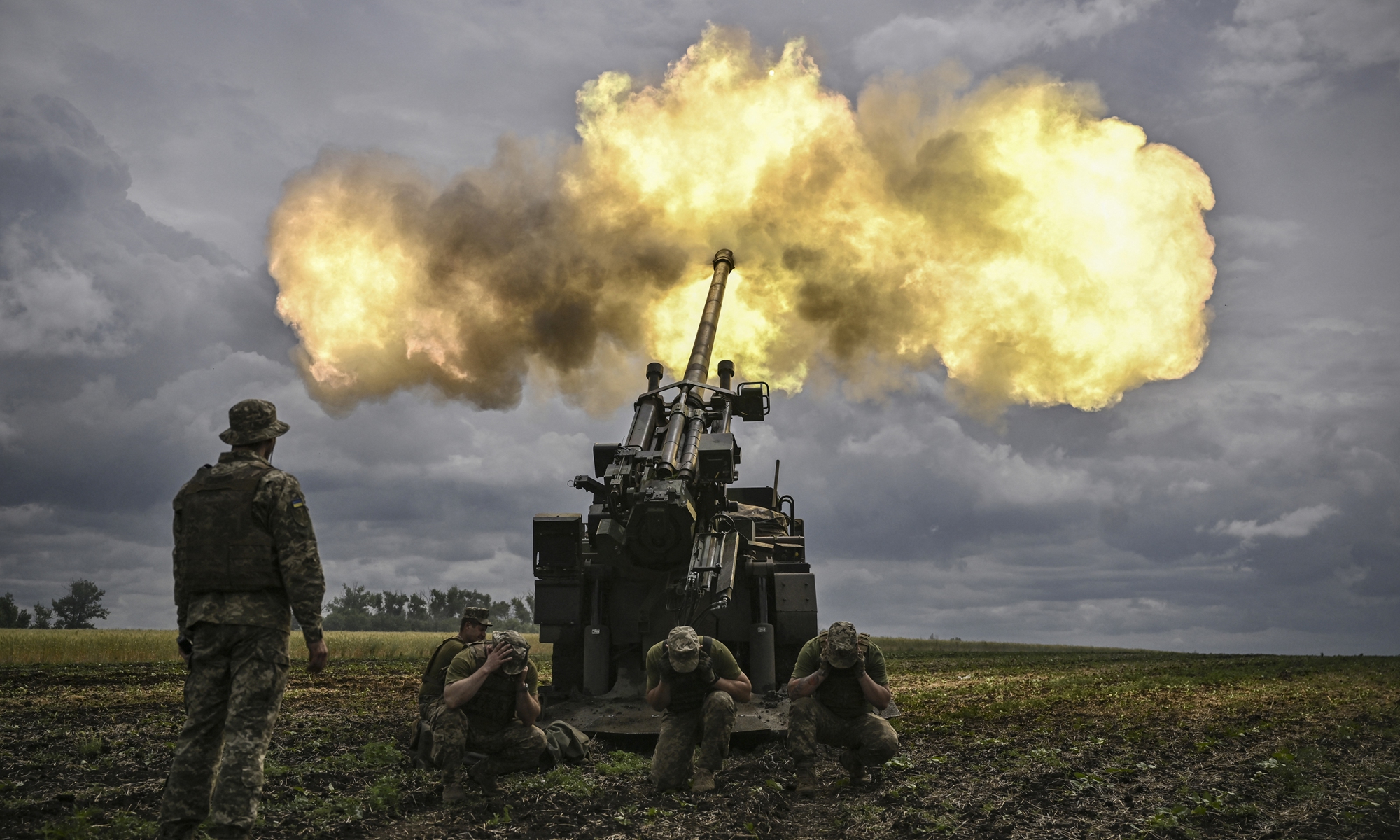 Ukrainian servicemen fire French self-propelled 155 mm/52-calibre gun Caesar at a frontline in the eastern region of Donbass on June 15, 2022. Ukraine pleaded with Western governments to decide quickly on sending heavy weapons to shore up its faltering defenses. Photo: AFPMounting pressure

In recent weeks, Russia has been facing growing pressure as Ukrainian forces have pushed hard in their counteroffensive with the support of weaponry from the West, and Russia was forced to withdraw from some key places in Ukraine. Currently, the US and its major allies are turning the ongoing UNGA into a diplomatic battleground, condemning Putin’s special military operation in Ukraine, calling the upcoming referendums “sham.”

“We should clearly understand who has led the conflict between Russia and Ukraine to where it is today, and who made Russia and Ukraine miss the opportunity to negotiate,” Cui Heng, an assistant researcher at the Center for Russian Studies at East China Normal University, told the Global Times on Wednesday.

During the ongoing UNGA – a platform supposed to focus on global issues of concern such as climate change, the food crisis and post-COVID recovery, leaders from a number of Western countries strongly condemned Putin’s special military operation in Ukraine.

US President Joe Biden accused Putin in his address to the United Nations General Assembly on Wednesday, saying that the world has experienced “a brutal, needless war, a war chosen by one man,” Putin.

“Countries that refuse to take a side in Russia’s war in Ukraine are complicit with Moscow’s new imperialism,” French President Emmanuel Macron told the UNGA on Tuesday, according to media reports.

“The Russia-Ukraine conflict should not be the issue overwhelming the UNGA sessions, as the world is facing so many challenges and the UNGA should be debating issues that concern the majority of countries,” a Beijing-based expert on international relations told the Global Times on Wednesday.

The urgent issues that the world is facing today is still security and development as there are still many living in poor conditions, and some struggle in deficit and disruptive climate change, he said.

“Only focusing on the Ukraine crisis and using it as an anti-Russia agenda is a tactic of Washington in kidnapping the UN, which is selfish and narrow-minded,” the expert said.

Compared to leaders from Western countries who ramped up the condemnation of Russia, representatives from developing countries have focused much more on concrete development issues. For example, Seychelles President Wavel Ramkalawan is calling for “bold actions, not unfulfilled promises and pledges,” warning that the window of opportunity to address climate change is rapidly closing for island nations like his, the Washington Post said.

Some pointed out the West’s sanctions on Russia have exacerbated the crisis. Brazilian President Jair Bolsonaro on Tuesday repeated his willingness to foster negotiations to resolve the conflict between Russia and Ukraine, calling for a cease-fire but renouncing sanctions and economic isolation.

UN Secretary-General Antonio Guterres said today’s world is in “great peril and paralyzed” in his opening remarks at the UNGA, and some experts believe that holding referendums and partial mobilization will make the confrontation between Russia and the West even more fierce.

Macron’s criticism of neutral countries over Russia-Ukraine conflict showed that Europe has formed a relatively sharp confrontation [against Russia], Cui Hongjian, director of the Department of European Studies at the China Institute of International Studies, told the Global Times on Wednesday.

“With such an extreme perspective, he sees the issue as an either-or choice, so the criticism is somehow biased,” Cui said. Also, China’s stance could not be easily summarized as neutral, as it has been holding a balanced stance on the matter, he added.

China’s position on the Ukraine crisis has always been clear. “We call on relevant parties to achieve a ceasefire through dialogue and consultations and find ways to address the reasonable security concerns of all parties as soon as possible,” Wang Wenbin, spokesperson of the Chinese Foreign Ministry, told media at a press conference on Wednesday in response to Putin’s address.

On the upcoming referendums, Wang said that the sovereignty and territorial integrity of all countries should be respected and the UN Charter and principles should be followed.”